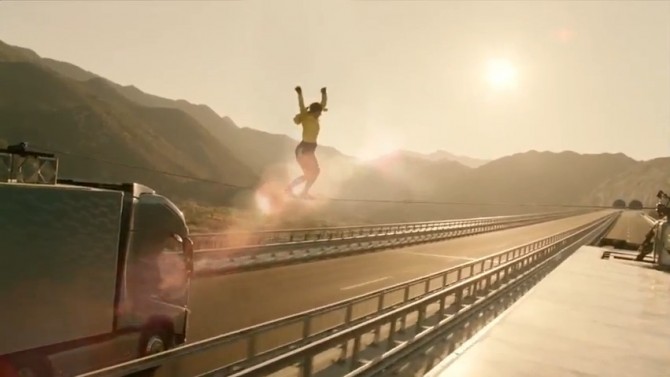 It’s hard to argue with success.

And when you rack up more than 5 million views on YouTube in less than one month for a video that cost less than 1 percent of your TV Commercial budget, no one can argue you are a success.

Volvo recently joined the ever growing list of YouTube video believers when it created a video to demonstrate the precision and control of its new FH series.

Volvo asked Faith Dickey, a world class rope walker, to go from one moving Volvo FH to another by crossing a rope tied between two Volvo. Of course there is a time bomb element. Otherwise, it won’t be exciting. The two Volvo FH trucks were driving towards two side-by-side tunnels with beams in the middle. Each truck is to go through one tunnel. If she doesn’t make it on time, she would hit the beams and she will most likely die.

There was no chance in hell Volvo was ever going to risk her life. She was on to the other truck kilometres before the Volvo FH ever came close to the two tunnels. However, the editing was brilliant. It sure looked like she was made only in the nick of time. It was Hollywood drama at its finest.

But there were able to accomplish two important things. First, they were able to demonstrate what they meant when they said “precision” and “control” in a way that only a true truck driver can understand without alienating the non-truck drivers.

More importantly, they got almost 6 million people to watch them boast about their product.